Senate to Take Up Infosec Bill in Early 2012

Senate Majority Leader Harry Reid, in a letter sent late Wednesday, informed Minority Leader Mitch McConnell of his decision to bring the legislation to the floor during the first work period of the 2012 legislative session. That's according to a statement issued by the leaders of the Senate Homeland Security and Governmental Affairs Committee, who praised the move.

That measure, as originally drafted, would establish a White House Office of Cyberspace Policy, with its Senate-confirmed director to have influence over agencies' IT security budgets. The bill also would reform the way IT security would be governed in the federal government, emphasizing real-time monitoring of government IT systems and a move away from paper-compliance under the Federal Information Security Management Act of 2002. The bill would require each agency to designate a qualified, senior official as chief information security officer.

S. 413 is one 20 cybersecurity-related bills introduced in the Senate this year; another dozen measures have been introduced in the House of Representatives, according to an analysis by Melissa Hathaway, the former White House official who spearheaded President Obama's cyberspace policy review in 2009 (see Evaluating the State of Infosec Legislation in Congress). 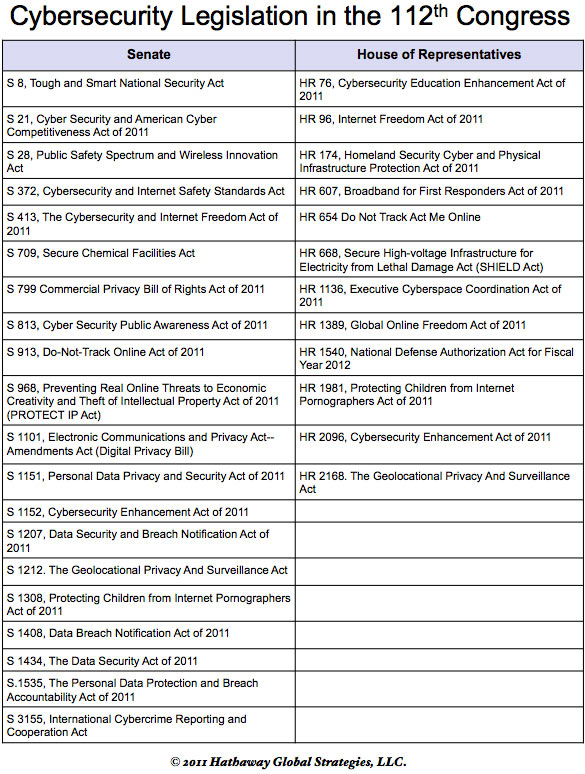 Cybersecurity reform, for the most part, has bipartisan support, but because of its complexity and other national priorities such as the economy and the Iraq and Afghanistan wars have placed it on the back burner.

The House also is taking a different, more piece-meal approach to cybersecurity legislation, rather than passage of a comprehensive measure (see House GOP Unveils Cybersecurity Agenda). Still, if the Senate passes a comprehensive bill and the House enacts more focused measures, a single, compromise bill could emerge from a joint Senate-House conference committee. Stay tuned.

A Holistic Approach to Developing a Combined Security and Compliance Program

The Responsibility of Risk

Small IT Department Structure: Meeting The Needs of Business

Senate to Take Up Infosec Bill in Early 2012