Two men suspected of being part of a criminal scheme that uses malware to "jackpot" ATMs and commit bank fraud have been arrested in Connecticut.

On Monday, Spanish citizen Alex Alberto Fajin-Diaz, 31, and Argenys Rodriguez, 21, of Springfield, Massachusetts, appeared in Connecticut federal court before U.S. Magistrate Judge Donna F. Martinez, who ordered them to be detained. Both have been charged in a federal criminal complaint with bank fraud, stemming from the use of malware designed to drain ATMs of their cash, in what's known as a cash-out or jackpotting attack.

While jackpotting attacks have been seen in other countries, they've only recently arrived in the United States. In recent weeks, the U.S. Secret Service has issued alerts to ATM operators, warning that attackers using Ploutus.D malware have been targeting standalone ATMs in box-big retailers and pharmacies. ATM manufacturers NCR and Diebold Nixdorf have also issued alerts (see First ATM 'Jackpotting' Attacks Hit U.S.).

The U.S. Secret Service says that since December, it's received reports of ATM jackpotting attacks occurring in the Miami, Washington and New York areas. Last month, a U.S. Secret Service special agent told Reuters that a coordinated group of attackers, which might be tied to international organized crime groups, had stolen more than $1 million via jackpotting attacks against U.S. ATMs. 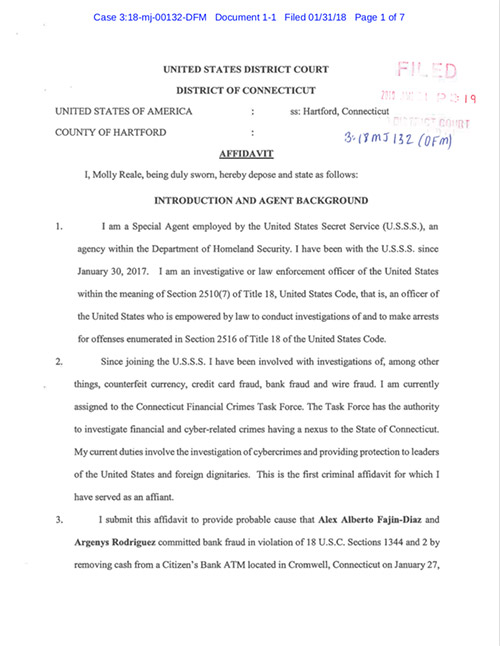 On Jan. 27, police in the Connecticut town of Cromwell responded to an alert from investigators at Citizens Bank of an apparent theft in progress from a drive-up ATM. The first officer on the scene said he found the two men in a two-door white Honda Accord just 50 feet from the ATM, and no other vehicles in the vicinity.

"Cromwell Police encountered Fajin-Diaz and Rodriguez near an ATM that had been compromised with jackpotting malware and was in the process of dispensing $20 bills," the Department of Justice says.

Police stopped the men, who were in the car. "A search of Fajin-Diaz and Rodriguez's vehicle, which had a license plate that was assigned to another vehicle, revealed tools and electronic devices consistent with items needed to compromise an ATM machine to dispense its cash contents. Faji-Diaz and Rodriguez also possessed more than $9,000 in $20 bills," a Justice Department statement says.

If convicted of the bank fraud charge, Fajin-Diaz and Rodriguez each face a maximum prison sentence of 30 years.

Federal, state and local law enforcement agencies have been investigating recent jackpotting attacks on ATMs in the Connecticut towns of Hamden and Guilford, as well as in Providence, Rhode Island.

An affidavit was submitted to court on Jan. 31 to provide probable cause for a criminal complaint that charges Fajin-Diaz and Rodriguez with bank fraud.

The affidavit says that on Jan. 22, attackers infected a Citizens Bank ATM in Providence with malware and drained it of more than $50,000 in cash.

"Video surveillance revealed that on Jan. 22, two men appeared at the ATM dressed in what appeared to be Diebold technician uniforms and accessed the interior of the ATM machine. The subjects spent several minutes conducting activities inside the ATM consistent with protocols used to install malware in ATMs. The suspects then closed and secured the ATM before leaving," Reale writes.

"Additional surveillance footage showed what appeared to be two other males approach the ATM and remain for a considerable amount of time, which I believe to be consistent with them obtaining cash that was being ejected from the ATM. Pictures of these suspects do not appear to match the physical description of Fajin (sic) and Rodriguez," Reale writes.

But she adds in the affidavit that the latter two suspects appeared to driving a two-door white Honda Accord, although the vehicle did not have the same license plate as the car which Fajin-Diaz and Rodriguez were driving on Jan. 27.

On Jan. 27, the affidavit says, video surveillance at the Citizens Bank in Cromwell shows two men, apparently dressed as ATM technicians, accessing the interior of the ATM, after which the feed was interrupted. But Reale writes that footage supplied by Citizens Bank "showed a dark colored SUV and white two-door Honda Accord at the ATM machine for an extended period of time." It says the SUV left before police arrived.

First on the scene was Officer Brooks, who stopped the Honda Accord, driven by Rodriguez, according to the affidavit. "Officer DiMaio arrived on scene approximately 30 seconds after Officer Brooks arrived," she writes, noting that he heard the ATM making beeping noises.

An investigation of the Citizens Bank drive-up ATM by a police detective who's also an ATM technician found a foreign cable inside the ATM, connected to an ATM component, Reale writes. The detective also found that the ATM screen was displaying "a picture that was also foreign to the setup of the ATM" and recovered a "deep insert ATM skimming device test sheet" from inside the ATM (see Hackers Practice Unauthorized ATM Endoscopy). Officers also discovered a wireless keyboard with a USB cord attached, Reale adds.

Run Your SOC Playbook to Perfection